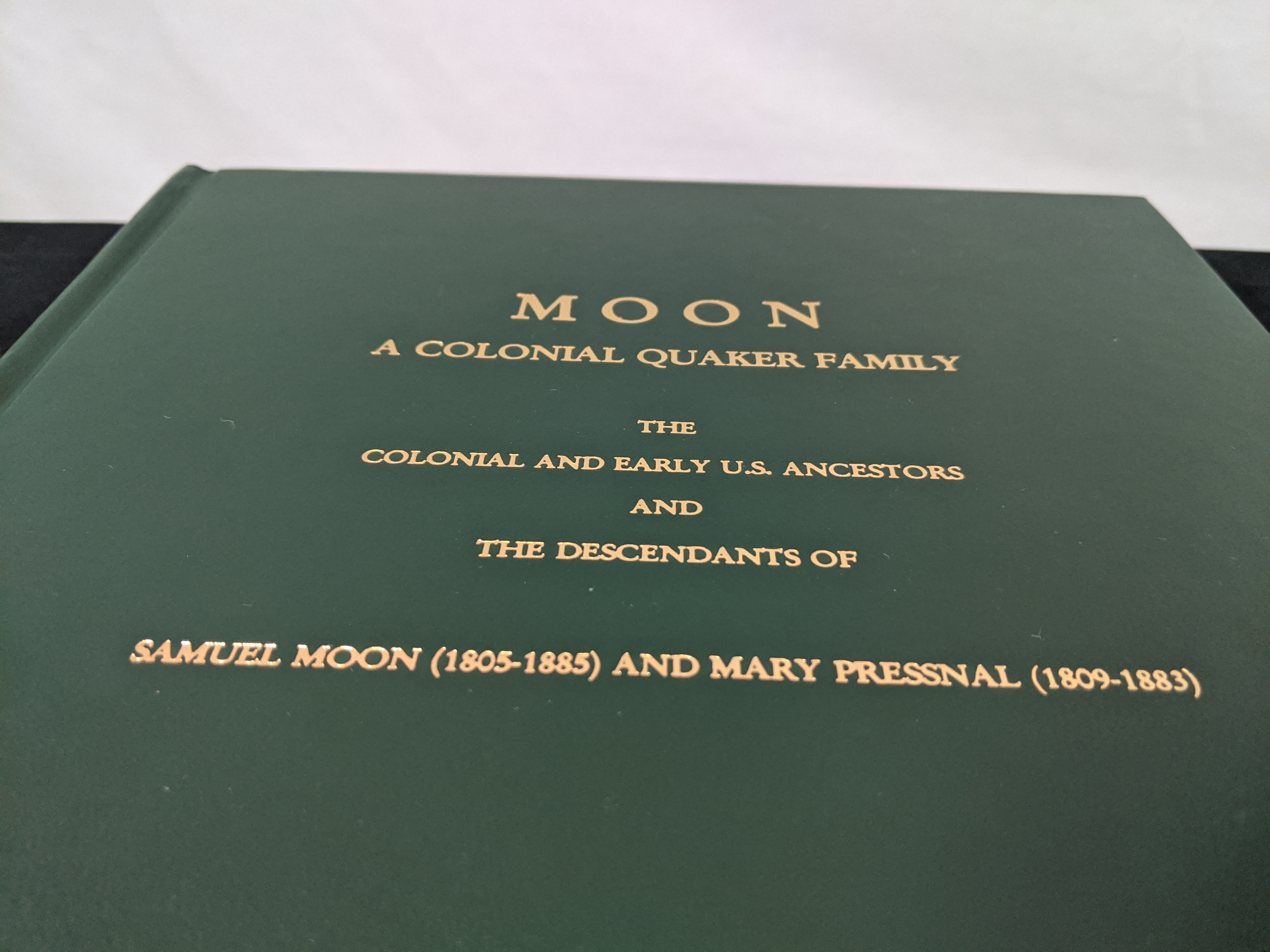 So, this is a weird thing to write a blog post about.

I recently had the opportunity to experience how cool it is to explore the comprehensive history of a family. Sites like Ancestry and 23andMe boast about how exciting it is to learn about your family history, but nothing is a true substitute for accurate record keeping. Often, information about the history of a particular family is passed down through oral tradition. This makes it possible to lose valuable information, since memory isn't perfect and you have no guarantee that any family member will continue to pass on their family history.

A better option is actually documenting the history of a family. Often, when you mention writing down a family history, the thing that comes to mind is a family tree. (For a more complex and interesting version of a "family tree", check out the concept of a genogram.)

Of course, a more comprehensive version of this would be to actually write a book. Typically this would be done by someone in the family who cares extensively about their family history. Convincing someone to fill this "family historian" role is often challenging. A friend of mine, however, has someone in his family who went above and beyond.

My friend is the grandson of a Mr. Milton L. Moon. Milton wrote Moon: A Colonial Quaker Family. This book is a comprehensive history of Milton's family, the Moon family, tracing his ancestry back to some of the first settlers in the American Colonies. My friend happened to have a few copies on hand, and I asked him if I could take a peek. It was so fascinating to me that I asked if I could keep a copy. It is with great pleasure that I share my experience reading Moon: A Colonial Quaker Family. It's over 600 pages long.

I did not read the whole book. I'm going to provide some highlights, and some reflections on the idea of keeping detailed genealogical data as a whole.

The book focuses the history on the descendants of a pair of early Quakers, named Samuel Moon (1805-1885) and Mary Pressnal (1809-1883). Samuel and Mary were actually the 6th generation of the Moon family that lived in America, (both the colonies and, later, the United States,) but Milton focuses primarily on Samuel and Mary's descendants for the bulk of the book. Samuel and Mary had 14 children, 13 of which married.

Samuel was one of 10 children. The fact that someone can write a 600 page book about the descendants of just one child in a family of 10 is a reminder of the staggering size of genealogical data that would be produced if we had a perfect map of the entire ancestry of a particular family.

I learned all of the above from the first 14 pages of the book. The remaining pages trace Samuel and Mary's descendants from 1800 to 1996.

Pretty drab in formatting, as you might imagine. Below is a scan of a typical page in the book, which lists genealogical data for some of the descendants of Mary Ellen Cahill and Donald Lee James (two distant descendants of Samuel and Mary.)

I'm writing this article because I think it's fascinating to explore the concepts of genealogy and I'm amazed by the work Milton has done. Because this book was originally written with the intention that it would be shared privately within the family, I've redacted any information that could be personally identifiable for living members of Moon family. 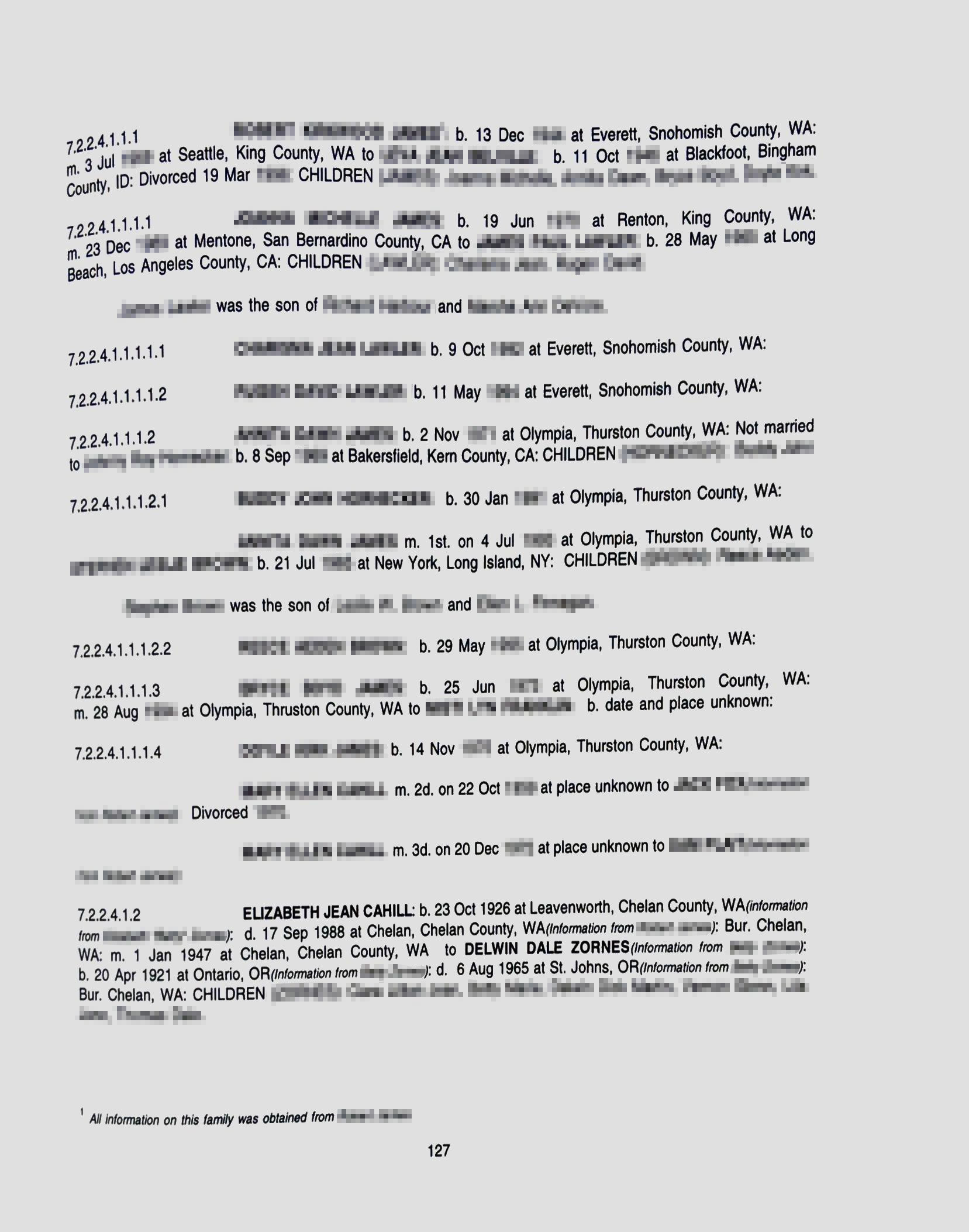 The numbering system you see here is actually used to explain the position of an individual in the genealogy. Milton writes that he "uses a slight variant" of the Henry system for genealogical number (the "variant" is actually just the d'Aboville System.) In the example above, (Elizabeth Jean Cahill,) the numbers 7.2.2.4.1.2 indicates that Elizabeth is the second child of her parents (the last 2), and that her parent (Mary Ellen Cahill is the link to the Moon family in this case) is her parent's first child (the 1 in the last 1.2.)

Maybe I'm the only one, but I find this super cool, on multiple counts.

As a programmer, the idea of parsing this out into some sort of structured data is fascinating to me... if we could parse this book, you could build a fully interactive and explorable family tree based on Milton's work.

As a human being, it's slightly sobering to see the lives of so many people captured here. So many of them are distilled to a single line in this massive tome. Each and every one of them had their own thoughts, feelings, worries, and thrills. Yet here, what part of them lives on? For many, just a mere record of their existence.

On the other hand, some entries have whole stories. Here's an excerpt from page 459.

Since Henry's wife in the below excerpt is still living as of the writing of my reference book, her name and identifying details have been changed.

Henry Fay West, the son of Emily Sanders, was born at Stockton, CA in March of 1922. He grew up and attended schools in Stockton, Lodi, and Placerville, CA. He gratuated in absentia from El Dorado County High School while serving in the army. He was married to Mary Beth Armstrong, the daughter of Emily's first husband, [Emily is the entry prior to Henry's, on page 458] Charles Armstrong, and his second wife, Ruby Belnam, in Helena, Montana in 1943 prior to being shipped overseas.

Ater [sic] completing the training at Morgantown, WV, he was sent to England with the medical detachment of the 16th Infantry Regiment, First Infantry Division, 1st. Company in December of 1943. He served as a medic with the invasion forces that landed on Normandy Coast on D-Day. He was killed in action in France during the battle for Saint Lo on 1 Aug 1944, at the age of twenty-two. He was awarded the Purple Heart and the Bronze Star, both posthumously. He was buried in the Golden Gate National Cemetery, San Bruno, CA on 13 Dec 1949.

Wow, this is a whole man's life (or at least a summary) put down on a page. I don't mean to make light of it, but this account brings up even more questions for me.

These are questions we likely won't ever know the answers to.

Encountering this book and exploring its pages was a fascinating reminder to me of the complexity of the human life, and of how valuable the stories of those who came before us can be. I wish my family had a genealogy this comprehensive, but is it sustainable? Who's willing to do the work to put this sort of thing together for their own families? This book would have been far more complete if people had captured written notes about their families when they were living, but how many of us have the patience for that. Without written records, future historians will simply have to wonder how many of our families were structured.

I'll concede that our record keeping as a society has gotten far better, but that still is just basic information about births and deaths. Remember, every human being is incredibly complex and has their own story. How are we capturing these stories today, and how can we do a better job in the future, for ourselves and for future historians? That's a question I'm supremely interested in, and can't wait to discover the answer to.